It’s easy to forget how terrible Internet technology was in the late 1980s and early 1990s. Expensive, unreliable connections, complicated command-line interfaces and weird connection protocols. A million things could go wrong, and even when it all worked, it was painfully slow and glitchy. Looking back, it’s difficult to believe anyone stuck with the technology long enough for it to improve.

The people who put in the work to make the Internet go in those early days often did so because the reward was pornography – first text, then images, then video. Pornography created the demand for Internet access, and also created demand for higher speeds, more reliable connections, and better interfaces. Many estimates suggest that sexual content represented as much as 80 percent of traffic on the pre-World-Wide-Web Internet.

Does this apply everywhere or is it just a US phenomenon?

Online pornography usage statistics vary from country to country, but there is no doubt that pornography had a global influence on technological development.

Pornography has its greatest influence on new technologies – it was more influential over the early internet than today’s online sphere. Once a technology becomes fast, familiar and easy to use, the mainstream tends to take over and push pornography to the margins. This, to some degree has happened to the Internet – obviously there is still a huge pornographic presence online, but there’s now much more of everything else.

You touch on a good point, though – today’s Internet doesn’t represent the end of technological evolution. As new communications channels evolve – Web 2.0, haptics, virtual worlds – pornography and sexual content continue to exert their influence. There will always be new forms of communication that are as unfamiliar and weird as the Internet once was, and the early adopters of such technologies will almost certainly use them for sexual purposes.

END_OF_DOCUMENT_TOKEN_TO_BE_REPLACED

Choose a topic, find out what the crowd is thinking, say the opposite, be annoyed and arrogant, criticize, never suggest solutions.

How it should be IMHO:

And stay humble, for God’s sake!

I’m against the PROTECT IP / SOPA. Truth is, you should be too.

When Jeremy Rifkin comes to town, it’s worth going to see him and ask a pair of questions. The first time I met him, last year, he was in Rome to talk about what he called  “The Empathic Civilization”. 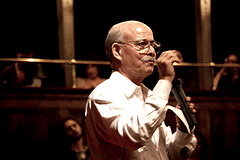 This time he took a speech about the main topics of his new book, “The Third Industrial Revolution“, which he presented in Rome during a lesson-like event in the wonderful Teatro Valle Occupato.

His talk lasted for about an hour, during which he stated that we’re on the verge of extinction and explained why. Then, he went on explaining what has to be done to “save our planet from ruin” and, in the end, addressed the audience as follows:

The following video (in English) is a short footage of the event featuring some of the people who where there, the very last part of Rifkin’s speech and a two-questions interview we (Diletta and me) shot with him before he left.

I’ll keep it plain and simple: I think that keeping the Steve Jobs tribute photo on the main page of the Apple online store for eleven days (so far) it’s a little odd, a bit disturbing and somehow creepy.

It’s a Pr mistake to keep this going for so many days, especially while customers are rushing the online store to buy every iPhone 4s available on planet earth.

And above all: I don’t think he would have let them do it. 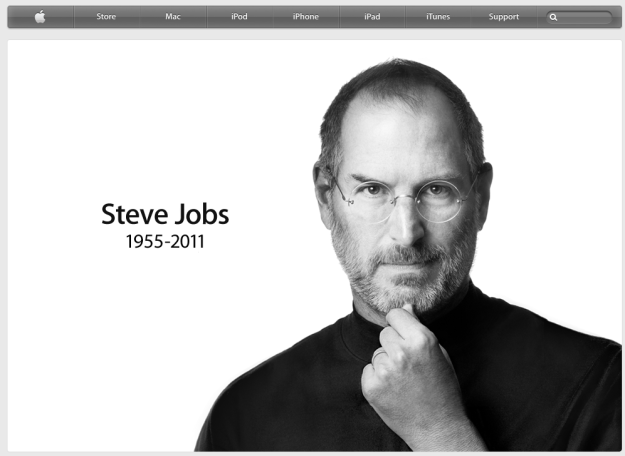 Yesterday I had a long chat with Marshall Sponder, independent Web Analytics, SEO/SEM specialist working in the field of market research, social media, networking and PR and blogger at WebmetricsGuru.com. Part of the talking was held in front of a public of professionals attending this event, during which we talked about the main topics in his latest book entitled “Social Media Analytics“.

The rest of the chat took place during the break, when we where outside standing in a sunny and warm roman afternoon. That’s when he told me something I was almost missing about the new Kindle Fire: thanks to its Silk browser and its deep integration with the Cloud, Amazon will know everything about where the users are going online with its new tablet. Which sites they visit, how many times they visit them, for how long, what are they looking for and so on: every single information will be traceable and could be aggregated, analyzed and then used to be eventually changed into money (yes, they’re really good at it).

If the Kindle Fire is going to sell well (and many seem to think it definitely will), soon Amazon will have in place another unbelievably efficient tool to retrieve a huge amount of data on users behaviors, habits and interests. And it will be the only one to gather such a treasure. I don’t know what you think, but I’m quite sure they’re gonna make good business out of that.

Of course, (or shall I say hopefully?), those data bill be aggregated anonymously and users privacy won’t be in danger. But at the same time there no doubt this cloud-enabled browsing is just another eye on our everyday life – quite like the new Facebook Timeline – and that in these days of “Publicy” the idea itself of privacy seems to be slowly fading away.

And if it will, there’s no turning back.

The story so far

Ghost writing can kill you. Or at least, it can kill your reputation. Ask Mark Davidson, Social Marketing & Communications Strategist at Shift+One Media, who (if all the story is true and not justa a stunt to get some media coverage) in the last few hours had his Twitter account and his credibility devastated by someone who claims to be “one of his three ghost writers”. The one he got fired after 4 years. 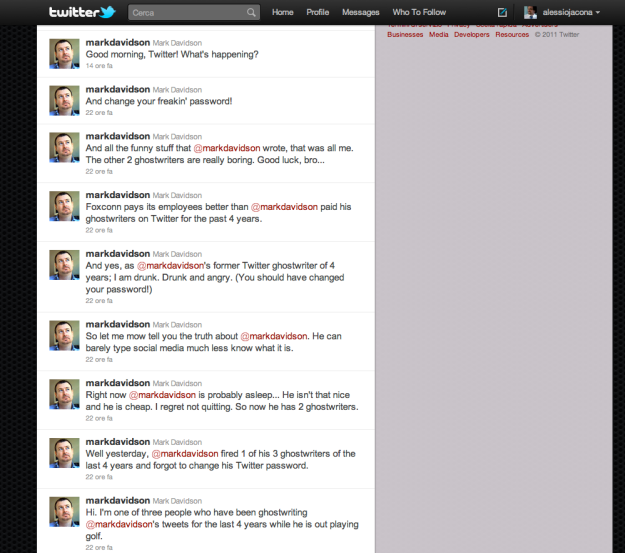 – “Hi. I’m one of three people who have been ghostwriting @markdavidson‘s tweets for the last 4 years while he is out playing golf.”

Then the second one:

– “Well yesterday, @markdavidson fired 1 of his 3 ghostwriters of the last 4 years and forgot to change his Twitter password.”

Then he (or she) goes on saying that Davidson “is not that nice and is cheap”. But the most juicy tweet is this one:

– “So let me mow tell you the truth about @markdavidson. He can barely type social media much less know what it is“.

The mess ends with a sharable advice: “And change your freakin’ password!”.

Now, that was two days ago. Then something even worse happened when what probably was one of the two remaining ghost writer logged into Davidson’s account after the attack. At first, he published a strange tweet speaking like he didn’t read what was published before. And then:

– Oh. I am so not dealing with this **** today. My only responsibility on this account is to respond to *all* @replies and @mentions. I quit. 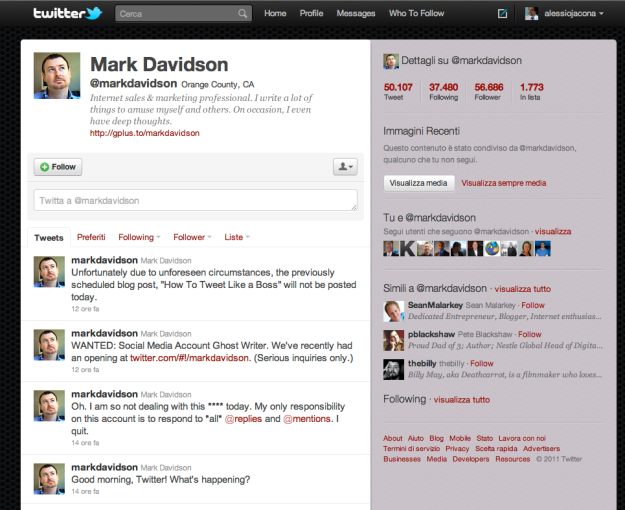 Then comes this one:

and then another one so far, which is my favorite one:

Yes. Good idea. Better not to.

The lesson to be learned

Now, If this is all this a joke, I just don’t get it. It could be a stunt to get some free coverage, or an experiment, but how is Davidson going to manage the aftermath? We’ll see.

In any case, what happened here points out that there’s an important lesson on how to deal professionally with social media to be learned: if you are a public speaker, a politician, a manager or whatever and you want to be on Twitter, it would be better if you manage your account by yourself.

On the other side, What to do if you want to be there but don’t have enough time to manage a real-time conversation? In that case you can hire one or more people to help you tweeting. There’s no shame in that: not if you are the one telling them what to write, if do you follow the conversation by yourself and do try to understand how this social network (or any other you want to be involved into) really works. And, above all, if you tell your readers the truth, that you are beeing helped, that there’s a stuff of smart people updating the account for you. Being honest with your followers is the most important thing. Tell them the truth and let them decide either to stay or go. Believe me,  you’ll be surprised. And you’ll earn trust.

If you do so, then who manually write down and the publishes you updates or monitor your followers, could be irrelevant. First and foremost if you

– tweet anytime you can (and when you do, tell you follower it’s you like President Obama does;

And – please – choose carefully the people you are going to give your password to. Just as careful as if you were giving them your latchkeys.

“Timeline is the story of your life and all the tools you need to express yourself. The beta period starts now”

And there it is: 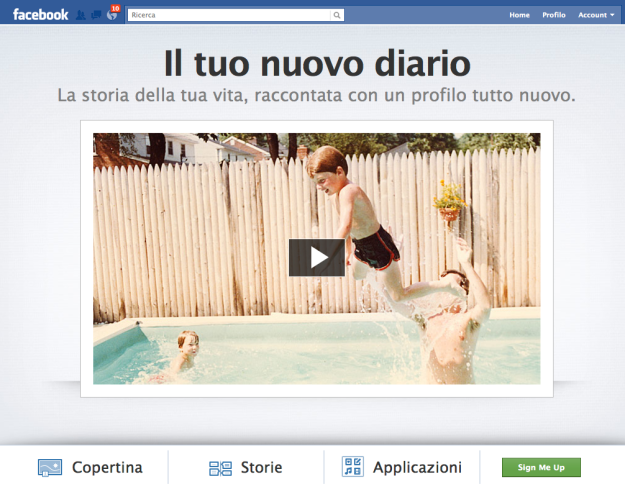 Or better, there’s its presentation. Right now if you try to hit “Sign me up” (in Italy at least) it says the service will be available soon.

Look forward to trying it.

It deserves five minutes of your attention:

Today I’m leaving for Berlin where tomorrow I’m attending the Next Conference 2011 together with my friend Luca Sartoni.

The programme of speeches and panels is huge and the topics are fascinating, so I’ll try to follow as much sessions as possible while making a few interviews for Nova24, L’Espresso and Lettera43.

Few months ago I wrote about this interesting event and published a short audio-interview with Martin Recke, Head of Conference Management, who gave me all the insights to the confererence (you can find the podcast here).

As I wrote back then:

We’re living surrounded by huge amounts of data, and still a lot more will come as Governments and Institutions will eventually release online tons of public data sets.

Are you ready to take you chance and build over them the next worldwide successful business?

If you are, let’s meet tomorrow at Next11 in the beautiful city of Berlin.